Home | Blog | EMSCULPT or CoolSculpting? What You Need To Know

EMSCULPT or CoolSculpting? What You Need To Know 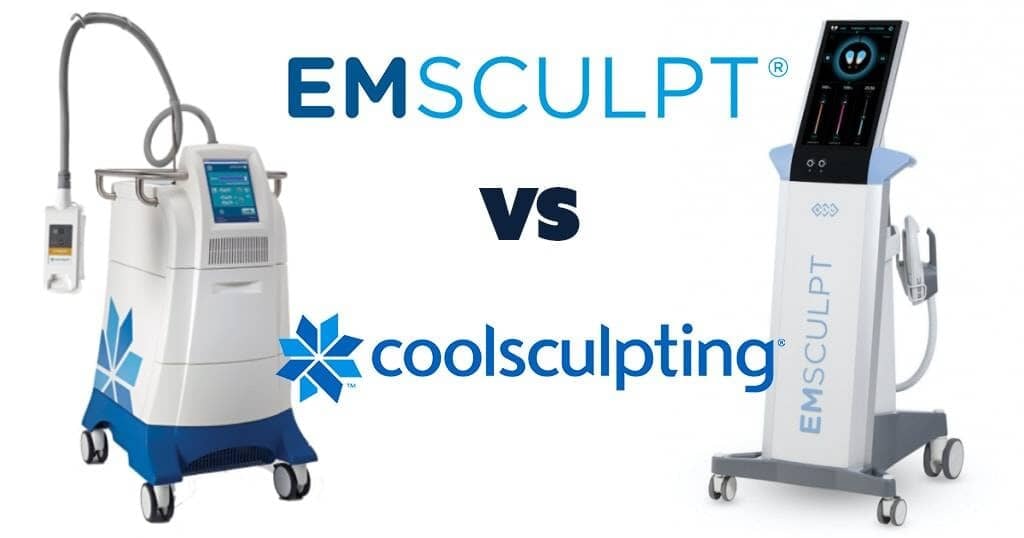 What is the difference between CoolSculpting and Emsculpt? Is one better?

With all the new body contouring treatments on the aesthetic market today, it’s sometimes difficult to understand the differences in all of these technologies.

…Patients are asking “Is Emsculpt Better than CoolSculpting?” The answer is simply NO.  Coolsculpting and Emsculpt are completely different.

CoolSculpting is our “go-to” device to permanently destroy and remove fat.  In our opinion, there is no better way to permanently remove pockets of fat and to contour the body than with CoolSculpting.  Keep in mind that CoolSculpting isn’t for weight loss and isn’t for debulking large areas of fat. It’s made for people who are at or close to their ideal weight, but are left with unsightly bulges on the abdomen, love handles, back, arms, legs, knees and the double chin.  CoolSculpting is FDA cleared for permanent fat removal.

CoolSculpting and Emsculpt work hand in hand as the perfect synergistic combination to essentially transform your body not just to look more slim, but well defined. The result is something that neither treatment could achieve on its own. To understand how these two treatments work together, read on!

So here is how CoolSculpting works.  Imagine that you have a cup of butter.  Let’s think of this butter as the fat we want to treat with CoolSculpting (because butter is very similar to the fat we want to destroy in our bodies).  Next, we have cup of water which we will think of as our skin (because we are mostly made of water). Now we melt the butter in the microwave oven so we have two cups of liquid…  liquid water and liquid fat. Let’s put these two cups into the refrigerator and notice what happens. The butter begins to harden because butter or fat is sensitive to cold. If we take the temperature even colder the butter will freeze before the water.  It takes an even colder temperature to make the water freeze. This analogy is exactly what CoolSculpting does. The carefully selected CoolSculpting applicators take the temperature down cold enough to freeze and permanently destroy the fat cells in the treated area, yet not cold enough to damage the skin and surrounding tissue.   After the CoolSculpting procedure the dead fat cells move through the body and are broken down and excreted through your urine. It’s really that simple. And because your body does not have the capability of creating new fat cells, your results are permanent. The patient must remain weight stable to enjoy the visible reduction in fat.

Emsculpt – The Muscle (and a little fat too)

Emsculpt is a completely new type of body contouring.  All the other devices ever invented were made to destroy fat or tighten the skin.  Most don’t do a very good job of either except CoolSculpting which does an amazing job at destroying fat as mentioned above.  But…. Emsculpt does something we never thought could happen. It actually builds and tones muscle! Emscupt uses the new type of patented energy called HIFEM which stands for High Intense Focused Electro Magnetic energy.  This is the same type of energy used in an MRI so it’s safe. But Emsculpt is much more powerful than an MRI. In fact, it’s so powerful that it’s able to make the muscle perceive the magnetic energy as a signal from the brain to induce a muscle contraction.  And it does this without any discomfort to the patient.

Emsculpt creates a magnetic field around the muscle and in turn causes the muscle to involuntarily contract. Really fast! Twenty Thousand Times In 30 Minutes! That’s equivalent to doing 400 crunches, 3 times per week, for 6 months.  Without missing a workout. And to make it even better Advanced Skin Fitness likes to do each area in a series of 6 sessions. So… we just gave you 3 years of crunches in only 3 weeks. Talk about a 6 pack without going to the gym.

Treatments are performed twice per week generally in a series 6 sessions per area.  There are two things that make an Emsculpt contraction better than a contraction from ordinary exercise. First, during a regular contraction in the gym your brain sends a signal to activate approximately 45-55% of your muscle fibers.

We just gave you 3 years of crunches in only 3 weeks. Talk about a 6 pack without going to the gym.

During an Emsculpt involuntary muscle contraction signaled by magnetic energy, approximately 95-100% of your muscle fibers are contracted.  This leads to the ability to create more muscle fibers and to make these muscle fibers bigger and stronger. The second reason that makes Emscupt able to build and tone muscle better than a regular exercise contraction is that Emscupt has a programmed “cycle” within the treatment that pumps out lactic acid. Pumping out this lactic acid during the exercise removes the main deterrent that hinders muscle growth.  Emscupt is FDA cleared for muscle building and toning of the buttocks, abdomen, legs, and arms.

Emsculpt has a well received side effect. It actually causes adjacent fat cells in the treated area to die through a process of apoptosis, which is basically suicide for the fat cell. Because of the 20k muscle contractions that are being performed in 30 minutes with Emsculpt, a lot of energy is needed to feed these contractions. It has been discovered that the muscle steals nearby energy for its involuntary contractions by causing the adjacent fat cell to release all of its free fatty acids at once. Releasing all of these free fatty acids at once are making the fat cells on both sides of the muscle permanently die. What does this mean for the patient?  One is that the abdomen shows a 21% permanent decrease in fat cells after a series of treatments. Second, it looks as if the abdominal muscle is stealing fat from the visceral fat on the interior side of the abdominal wall as well. So we may for the first time have a way to treat the unhealthy, visceral fat that accumulates around the organs. What a nice side effect at no extra charge. CoolSculpting is still our preferred treatment for permanent fat reduction but it never hurts to have extra help from another body contouring treatment, Emsculpt.

Emsculpt can also be used as a therapeutic treatment. We are currently working with senior who have lost core strength and have resorted to walking with canes. With Emsculpt for the geriatric patient we can safely and effectively build leg and core strength increasing qualify of life. And we can make life more comfortable for this population by building back the butt so that sitting on hard surfaces for long periods of time is easier. This is also break through technology to build muscle for patients who have had strokes or are paralyzed. It can even build back the muscle in amputee patients that don’t have the ability to exercise a muscle because part of the muscle or limb is missing.

“I never thought it was possible to look like this at age 45.  I have always struggled to put on muscle mass. I’ve had small, embarrassing legs my entire life and my torso was “skinny fat’. My back looked like a bird.  No shape at all. I literally transformed my body into something I don’t even recognize in the mirror after 12 weeks because of my CoolSculpting and Emsculpt treatments. It was an expensive risk for me. I was leary because the technology is so new.  But I’m so thankful I tried it.” – Clint W

When someone is looking to make dramatic changes in the body, sometimes fat reduction alone isn’t enough.  A well-defined, contoured figure or physique has both proportionate muscle mass and body fat composition. This requires a dedicated diet combined with regular exercise, but can be accelerated and perfected with the appropriate non-invasive body contouring treatments with CoolSculpting or Emsculpt.

Whether you want to undergo a total body transformation, or just work on a stubborn area, we can create a plan just for you using CoolSculpting, Emsculpt, or a combination of the two. Advanced Skin Fitness treatment plans have helped countless patients look their best, gain confidence, and feel great for years. Now with the combination of CoolSculpting and Emsculpt, our results are even more amazing. Talk to us to see what kind of transformation you can have. You may be amazed.

We’re open 10AM to 6PM Tuesday – Friday and 10AM – 5PM on Saturdays for your convenience. Drop by and talk with us.

What is Cellulite and How to Reduce it

What Is Collagen & How to Boost It

$100 Off Your First Treatment of Choice!

SUBSCRIBE TO OUR NEWSLETTER! GET REGULAR ASF SPECIALS, DISCOUNTS, AND BE THE FIRST TO KNOW ABOUT NEW CUTTING EDGE TREATMENTS! PLUS, GET A $100 COUPON TOWARD YOUR FIRST TREATMENT.